The August 10-12th weekend was filled with events in Sunset Country. From the Atikokan 4X4 Mudfling to the Shaw KBI to the Blueberry Festival in Sioux Lookout to the Trout Forest Music Festival in Ear Falls, Sunset Country had it all. Here's a quick recap of the weekend with links to see some of the photos of these summertime events.

The Atikokan Mudslingers 4x4 Club Mudfling was held August 11-12th and had a double feature presentation. Spectators got to see "Full Throttle" and "Paper Boy Express" in action at the Opening Ceremonies and at Intermission on Saturday, and again on Sunday morning. "Full Throttle" and "Paper Boy Express" was set up in an area for you to talk with the people that built and drive these awesome machines and see their cars up close. The 4x4 Mudfling was held at the Charleson Recreation Area in Atikokan. Bookmark the Mudslingers' website for next year's events and to see photos of the event. 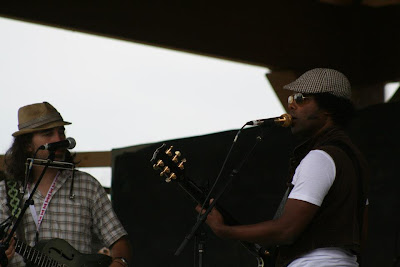 The SKBI was held August 9-11th, 2012 on Lake of the Woods in Kenora. Aaron Wiebe and Peter Tully were the 2012 tournament winners, taking home a $22,375 first prize. 2012 was the 25th year for the SKBI, which for years was named KBI until Shaw became a major sponsor. Past tournaments are showcased on the newly designed SKBI website. The bass tournament on Lake of the Woods is now known as Shaw KBI or SKBI. The biggest bag of fish came on day two with Jim Gustafson and Ben Gustafson reeling in 20.40 lbs. Jon Olson and Clay Lajeunesse got the biggest fish on both Day 1 and Day 2 with a 6.09 and a 5.99 lb bass. Day Three's biggest was caught by Michael Dufresne and Louis Syemour with a 5.38 pounder. All results of the 2012 Shaw KBI can be found online here. View some more photos of the SKBI at the 89.5 The Lake Facebook page.

News articles about the SKBI:

Over 340 paddlers took part in the 10th Annual KLWRCF Dragon Boat Festival held August 12th on Rabbit Lake in Kenora. The one day festival went off without a hitch, finishes a couple of hours before the rain began. 17 boats raced this year's 500-metre water course. The races were held in heats of 2 or three boats starting off on the east end of the lake and ending just in front of the cheering crowd at the Kenora Rowing Club. After a few races, they broke for the flower ceremony where the Dragon Tamers, Chemo Savvy and other female paddlers took to the water. The Dragon Tamers were selling carnations to be thrown in the water after a touching song and the single beat of a drum. The foundation raised $22,000 from this past weekend's dragon boat races. Super Troopers won the A-side title, and Carpe Diem, members of Kenora's legal community placed first in the b-side event. Check out some of the photos on the Sunset Country Facebook page or the 89.5 The Lake Facebook page.

All in all, in was a very busy weekend in Sunset Country. For a list of events in Northwest Ontario, visit the new Ontario's Sunset Country Events Calendar.

Add Sunset Country to your circle